I’m on the phone!

I’ve got one of those smart phone things. Not a silly one which the people who really want an iPhone have, but a proper iPhone and not just any iPhone but the 5, the top of the range one that can carry about 20,000 songs on it and all of the internet, plus some films. I’ve put an Australian slave in it to make it do things for me at my vocal command. I can ask the Australian slave in my phone what the weather is going to be like in London tomorrow and she will most likely say something along the lines of “It’s not looking too good in London tomorrow Sandy, you might want to take an umbrella”. I am not making that up! However, while I am often ‘on the phone’ the one thing, of all the things I do, that you are least likely to ever see me doing, is speaking to anyone on a mobile telephone device outside of office hours. Take work out of the occasion of course, but in my personal life I make so few phone calls on a mobile phone I almost don’t even require it to have that function.  But I am never without one about my person. Want to know what I do with it? Let’s go back a bit.

It’s remarkable, even amazing what has happened to the telephone since I first met one. The telephone is easily the most significant method of communication throughout my life. So much of my communication in the various relationships with friends and family has been maintained largely by telephone rather than face to face. I’m not even that old but you should have seen the first telephone I can remember encountering when I was five years old. Let’s pop back there to start the story.

The telephone we had at the farm at Mahia was one of those big wooden ones with a winding handle. You would wind the handle and somewhere a lady who was probably doing some knitting in a small wooden building would answer, you would speak to her with your greeting of choice. In our house you would say “tolls?”  She would inquire as to the direction of your call, you told her you wanted to speak to Auckland 556 or some such thing. After a few minutes you would be speaking to a relative or friend in another part of the country, most likely with the knitting lady listening to your conversation. My Grandmother took a holiday overseas at this time and it took fully 9-10 minutes to be connected to a number in England to speak with her.

Latterly we got one of those phones with the circular dial on the front, I always wondered why they put the emergency services number as 111 as that was the longest possible 3 digit number apart from 000 to dial from where you started the rotation of the circle, remember? Fortunately we never needed help urgently as if we had ever called the constabulary out there it would have taken them in the region of 2 hours to get to us if they set off immediately upon taking the call.

When we moved to civilisation we had a party line, this meant you shared your telephone line with a few other houses nearby, You’d pick up the phone to hear other people speaking on it and say “Working” which was a bit of a redundant question as you could hear people talking. I guess what it meant was ‘get off the bloody phone’.  When I was growing up, one of my father’s most well-known phrases was, “I’m going to do some ringing up”. This was done every second night or so and always at a specific time. He would make the necessary phone calls to arrange the things that fathers arranged. Another common phrase, usually shouted, from dad while we three boys amused ourselves during the ‘ringing up’ period was ‘I’m on the phone’ which needed no further elaboration.

Meanwhile I wanted to do my ‘ringing up’ as well as we had no friends within walking or even cycling distance. All communication was done outside school hours by telephone. We saw our friends face to face socially only when the community got together. Otherwise we spoke on the phone. One of the most controversial moments in New Zealand sports history was played out with my friend Guy and me as teenagers making to and fro phone calls with every development with ever increasing hysteria. Culminating in the final act where Guy and I just screamed a stream of unintelligible profanities at each other in total shock and disbelief at what we had just witnessed. Standing in the hall as the TV was in another room. The ‘under-arm incident’ of course.

When I joined the Army, I was allowed a phone call home each week. Mum was horrified to hear my accent deteriorate into Army Speak.  When I left home I spent far more time speaking with my family on the phone than visiting. When I left New Zealand, now all I had was the telephone. From Australia, again Mum was horrified to hear my accent come over all Aussie.  When I arrived on the other side of the world in 1991, the telephone calls home became even less frequent as the cost was huge.

I have spent far more of my life speaking with the people I knew, liked and loved and grew up with on the telephone than face to face. Apparently I have a good telephone voice. The Telephone has been my lifeline and my communication system with everyone since I first met one. It was the nature of my always finding myself living remotely from those I knew. Now we have mobile phones everywhere and everyone is talking on them all the time, except me it would seem. I don’t make calls with mine, well not many.

I make my phone calls to people I wish to speak to from a landline, at home in private. Who is everyone else speaking to all the time during the day? Well I know who some of them are as it seems many people have no idea that other people can hear them, or do they not care? If not why not? Sometimes it’s funny, like the guy engrossed in a conversation with his wife, or mistress, or whatever, standing in front of the Agent Provocateur window in Soho, and shouting into his phone while looking at and describing to her an incredibly revealing and ‘saucy’ bra and knickers set. “Darling it’s SO you!”

Or not funny but tragically sad. Like the lady on the train talking to her partner who obviously has huge self-esteem and depression issues. I had half an hour of a one sided conversation beside me as he was clearly having a bad day at home. A conversation that should have taken place behind the closed door of a therapists office. Then there was the ‘yummy mummy’ who didn’t want to drive the night of her husband’s Christmas party, why should she sit there with some Elderflower cordial while he and all his colleagues got pissed?  She asked him this question over half a dozen times in various ways while I was sitting opposite her. Then there is the commuter who describes his day to his wife while on the train on his way home, to his wife. Why? These are people having conversations that could and should be face to face in private, but they use a phone in public? Why? I spent my life having to use a telephone to speak to people I would have rather spoken to in person. These people are doing the opposite, maybe that’s why it upsets and angers me so much

The people walking around in public, living lives publicly, in front of everyone, shouting personal things down a mobile phone in a shop, while making a transaction or standing right next to me. Stop it, put it down! Have you no shame or social awareness? It’s just rude and also completely unnecessary! It also pisses me off.

Having said all that, like I said before I always have my smart phone with me. I use it an awful lot. I love it as it’s my favourite gadget. So if I’m not making phone calls what am I doing with it? My iPhone is full of Apps, some of which I use. I use it a lot for Facebook as for me it’s like the modern version of the old gossipy phone call. All my old friends back home are living their lives while I am asleep and vice-versa. It keeps me in touch, but that’s not what I mostly use it for, I do a bit on Twitter, but not much. I use it a bit to make my Australian slave tell me where things are. Like the nearest petrol station for example. But that’s not what I mostly use it for. I occasionally make some birds angry with it. As an aside I think the birds look as though they’re having a ball and it’s actually the pigs that should be angry?

My phone is powerful enough to guide satellites through space.  There is almost nothing you cannot do with it as it is a technological marvel and also a thing of beauty to hold, no really, you should see it! 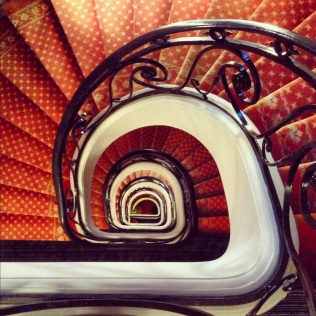 My favourite thing which I mostly it for? Well taking photos of random things, messing about with them a bit and then putting them on the Internet for fun of course!

‘What on earth is the point of that’ you may ask? Well it’s my phone and it amuses me in my spare time. That’s good enough surely? I might ask what the point of golf is. I don’t need special clubs and shoes though, nor unattractive knitwear in questionable colour combinations. I hate Golf but I enjoy Instagram.

So if you ever need to find me, most likely I’m with my phone, I’m just not ‘on the phone’.