A River runs through it

This is a bit of a travel post. I’m going to talk about a place plenty of people on their New Zealand holidays travel through, but not many travel to. I’d venture that most New Zealanders would struggle to point the region out on a map. So this can serve as a mini travel guide for Kiwi’s as well as those from far away who come to visit.

When people plan a trip to New Zealand, if they know anything at all about their destination, they’ll be factoring in such things as bubbling mud, Queenstown, Hobbits and Lord of the Rings destinations, some Mountains and perhaps the Bay of Islands. The visitor may be a wine fan, or keen on a fresh air and wide open spaces, clean, green, jump off a high thing, adventure in the outdoors where nothing nasty will bite you sort of holiday. Or maybe they just want to go to a beach, or ski, or see all the New Zealandness from a campervan on a road trip.

New Zealand offers all of it in spades, we all know that. Everybody knows where all the good touristy stuff is and the visitor drives keenly from one tourist attraction to the next. Wondering where everybody is and why there are so many Police cars parked on the side of the road.

The Rangitikei is a region, which starts at Taihape in the North and ends in Bulls in the South. It only has 5 towns. Small towns at that. Taihape as I mentioned, Mangaweka, Hunterville, Bulls and Marton which describes itself as the hub of the Rangitikei, although Marton’s best days were about 50 years ago. The glory days hinted at by the fact that two of the best schools in the country are in Marton for no currently apparent reason. This is old sheep money country though. The small towns are in slow decline as they are everywhere but the money is still here in the district. Great iconic Sheep stations are in the nearby hinterland and the families who own them still live in the area. 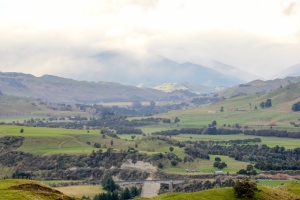 I’m not going to talk about the towns; these would be villages in any other country. They are small and ‘villagy’ but have extraordinarily interesting and diverse shops. I’m going to talk about the region, The Rangitikei. New Zealand’s main road, State Highway One runs right through the middle of the Rangitikei once you leave Taihape if you are heading south. The first thing you’ll notice is the beautiful river valley which runs alongside the road for the next half an hour or so on your journey towards Hunterville. The great high Papa (clay, pronounced paahpa) cliffs carve through the landscape in an incredibly dramatic fashion. High railway viaducts criss-cross this magnificent river valley as the New Zealand main trunk railway line also passes through this region, following the river for a while. 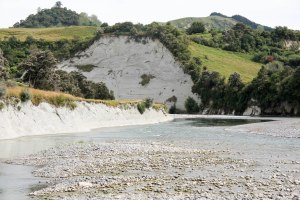 The Rangitikei River itself is what we call a meandering or braided river. Changing course frequently as the river rises and falls according to the rainfall in the distant mountains. This was the setting for some of the Anduin River scenes in Lord of the Rings and is popular with white water rafters and canoeists. The Rangitikei River alternates between slow gentle flow and wild rapids. All along the river are low accessible banks to camp on and high cliffs to marvel at. You can also fish or swim in it.

The mountains form the marvellous backdrop to this most scenic of river landscapes. You can see Mt Ruapehu from time to time from a remarkable distance as you drive north. On a clear day you can spot the mountain from just north of Bulls, about 150 kilometres distant. If you look in the right place, you’ll catch the odd glimpse of it along your way. To the East are the Ruahine Ranges, snow capped throughout the winter. If you turn off the main road and drive towards the Ruahine’s you’ll eventually find yourself on one of the many gravel roads which end at the edge of this wilderness, you can simply walk in to the bush, cross the ranges on foot and end up in Hawkes Bay if you are feeling adventurous. 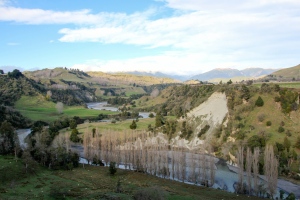 The Rangitikei is the bit between the arable plains of the Manawatu and the alpine desolation of the Central Plateau. It’s not very big, in the big scheme of things, but the diversity of the landscape is extraordinary, there is nowhere in New Zealand quite like it. There’s not really anywhere of note to stop in the Rangitkei. There are fairly limited hotel or motel and no actual resort facilities in the region. There are a handful of spectacular unique or ’boutique’ lodges and farm stays though. There is even a proper shooting lodge or two and a couple of amazing Golf courses and camping sites. But there is no great world famous tourist attraction to bring the busloads of foreign tourists. Which is a good thing.

But there is an otherworldly attraction all of it’s own to the Rangitikei. The deep sheer sided river valleys and their white cliffs. The steep winding roads to nowhere in particular. The huge vistas across the Rangitikei river valley to the mountains in the distance. The quirky shops in the tiny towns. All of it is worth spending some time exploring, as that’s what you do here. You potter about, follow your nose, drive down a dead end road to the edge of the mountains or the banks of the river. Or walk down to the White Cliffs Boulders.

The White Cliffs Boulders would have to be the least known attraction in New Zealand. They are in the middle of nowhere, at the end of a farm track, which is several kilometres down a gravel road in the middle of the Rangitikei. There are few signs to them and even less publicity of their existence. Yet they are one of the most remarkable geological formations you are ever likely to encounter. An ethereal place of natural wonder in the middle of a clump of native bush beside a bend in a remote river. It looks like a scene from one of the Hobbit films. A collection of smooth symmetrical boulders and rocks scattered around the forest with trees growing on, in and over them. All in a mossy green. There is no sound but that of running water and bird song. Meanwhile you are standing in what looks like a film set or alien landscape. 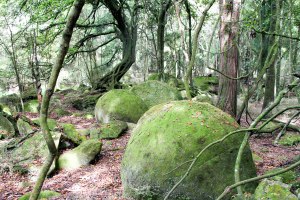 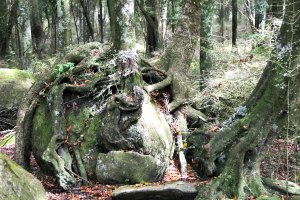 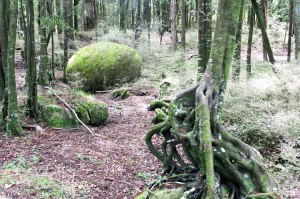 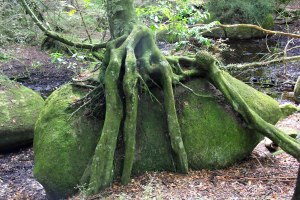 The Rangitikei is where people travel through, rather than travel too in most cases. People stop there but few go there. They should. It’s not just about the river. Stop, stand and look across the Rangitikei. This is one of the world’s great-unremarked landscapes. One of the best bits of New Zealand. People should spend more time looking at it.