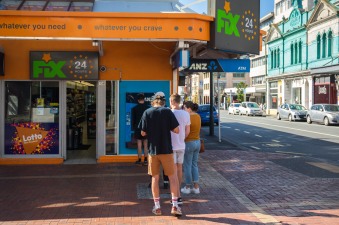 The title is ironic, if you really did need therapy for anything in New Zealand; one of the worst things you could do is go shopping.  I was watching the television news recently when the usual advertising messages came along all too often as they do here. I was being shouted at to buy some furniture, or reminded of another weekly sale, I was told to get in quick before it’s all gone. I learned I could have a free paint roller if I bought a new stepladder and advised I could go fishing for half the price of the mugs who paid twice as much in a retail store.

Our advertising is woeful, very occasionally a clever one will come along which we all talk about on social media, we use the tag line of the good ads in our daily lives and they become part of our culture. Most ads though are sales promotion, people shouting messages of deals that can’t be missed. The only thing worse than our advertising is the retail experience you are about to endure should you need to visit one of our many national chain stores. This got me thinking I should do a small examination of some of those most commonly found in the New Zealand ‘High Street’. A sort of public service for a visitor to New Zealand.  I’ll go alphabetically. Are you sitting comfortably?

Bed Shops: I’m lumping them all in together because we have so many.  Seriously, nowhere else in the world would have as many bed shops as New Zealand. What’s that about? Who’s buying all the beds?

Book Shops: Whitcoulls and Paper Plus are the main chains, virtually indistinguishable from each other. Many times I have been in the wrong one with the wrong loyalty card. Books are ridiculously expensive in New Zealand for no good reason.

Briscoes: Sell what you might call Home-ware. I believe there are only one or two days of the week when Briscoes charge full retail for anything, usually they have a 40 or 60% off sale, promoted almost daily on television by an ageless lady we call Aunty Briscoe. Imagine if you were a new migrant to New Zealand and you mistakenly went to Briscoes on the only day they weren’t having a 60% off sale? Briscoes is where we go when we want some plates, or a microwave.

Bunnings: An Australian hardware and associated products megastore.  They have a thief checker disguised as a welcome person at the entrance/exit. They are only there to check your receipt to make sure you haven’t stolen stuff. Their default setting is to assume you are a thief until proven otherwise. I don’t shop at Bunnings unless I absolutely have to and even then I’ll always give Mitre10 a chance to price match.  They also don’t give you any sort of points on any Loyalty card. Their staff are always hassling you to let them help and are just that little bit too friendly. I don’t want to tell every Bunnings person I see how my day is going.  It gets worse for every Bunnings staff member I encounter until the lowest point which is the last one who wants to make sure I didn’t steal anything. I hate going to Bunnings.

Cash Converters: Here you can buy other peoples things. The stuff they bought off the shopping channel or TV adverts where you buy one and get one free. It’s also where P addicts go to sell their children’s toys to fund their next hit. If you want to feel better about yourself, spend some time outside Cash Converters watching the people come and go.

Farmers: Clothing for the elderly and fashionably challenged, for people who don’t care how they look or can’t afford nice clothes but haven’t quite sunk to Warehouse clothing yet. You buy work clothes from here for office jobs. They also stock cosmetics and a do have a very good furniture and home-wares section in many of their stores. Their clothes are not only dowdy but also remarkably poor quality, as is pretty much all the clothing for sale in New Zealand. There are very few people who make and sell good clothing here.  Alongside the arrangement of poor quality but inexplicably expensive clothing they also carry New Zealand themed t-shirts, which are actually quite good and well made and popular in NZ. Kiwis are happy to walk around in a t-shirt with iconic Kiwiana on them. Things like Milkshake Cups, retro Commonwealth Games logos and fish species charts.

Hallensteins:  Try to pretend to be cool but everyone knows they aren’t. Weird small sizes. Young people in their first job in a shop would probably buy their work clothes from Hallensteins. They sell clothes that are supposed to look ‘street’, but you know it’s from Hallensteins.

Hannahs. Poor quality, fashionably challenged, over priced footwear. Our footwear should be a national disgrace. They sell several brands of shoes with soles made from cardboard. Not all their shoes are crap, just most of them.  Too many of their shoes look like corrective footwear.

Harvey Norman: They sell furniture and technology, they usually charge more than other stores for it, if they charge less then you go to Noel Leeming to ask them to price match so you can get some flybuys, flybuys are a New Zealand shoppers loyalty card which has little or nothing to do with flying but you accumulate tiny rewards for every $25 you spend. Just not at Harvey Norman, they give you even smaller rewards on your airpoints card, which IS about flying.

Hippy Shops: We have a frightening number of outlets that sell crystals and model dragons and witches, posters of Native Americans and wolves, dream catchers, incense and drug smoking paraphernalia. Literally every single town in New Zealand has at least one of these shops.

Hunting and Fishing: You can literally buy anything you need to enable you live forever in the scrub and off the land and sea from animals you’ve killed. It appears all New Zealanders are Hunting or Fishing all the time. By hunting they mean shooting. They sell an extraodinary array of firearms. You’d be amazed at the guns you can buy in New Zealand, yet we have hardly any gun crime. They also sell Hockey equipment, go figure.

JB Hi-Fi: So many signs, this is where you buy tech items from people who know more about tech than the useless staff at Noel Leemings. The signs though? It’s like walking around in a Chinese laundry, but instead of clothing, it’s signs, and they are all written in crayon. I hardly ever go in here, as I prefer giving Noel Leeming a hard time when I need a technology item.

Michael Hill Jeweller: Never pay full price here. The staff are always very keen to see you walk out with an item of jewellery and are prepared to haggle. Always haggle. They also sell watches which Michael Hill has written his name on. I have no idea who would buy a Michael Hill branded watch.

Mitre10. I love Mitre10. This is New Zealand’s best shop. I go here just to walk around and look at all the things I’ll need soon, Hardware and all those associated DIY items, Outdoor furniture, garden centre. Megastore awesomeness. I don’t work for Mitre10.

Noel Leeming: One of the most complained about shop chains in New Zealand, but they price match and you get Flybuys. Very few of the staff have any clue about any of the items they sell. For a technology and appliance, or any store, this is not a good thing. They will also more often than not, allegedly, put loan protection on top of anything financed without telling you they’ve done it or what it’s for. Always check your receipt. They are strangely much more expensive than camera shops for camera equipment though.

Pascoes: This is where someone called Dwyane might buy some gold plated jewellery for the love of his life, Chantelle before he gets her name tattooed on his chest or back.

Smiths City: They sell the same stuff as Noel Leeming but it always seems a bit down at heel here. Like it’s going out of business next week. You half expect the items for sale to have cobwebs on them. The are hardly ever busy and I’m not sure who shops here or how they are still in business.

Spotlight: The go to store for craft items and things you make out of material, plus some home-wares you would normally find in Briscoes. This is where your nana shops for knitting stuff and quilting things. This is the only store in New Zealand where you are likely to stand in the checkout queue behind an elderly woman paying $1.45 in coins for a length of some sort of string and who would then produce two loyalty cards to get her discount and points.

Stevens (in Farmers): Where you buy things for the kitchen from staff who all seem to hate working there. You can buy similar things in the home-ware bit of Farmers which will be somewhere else in the store, so it’s like having your competitor camped in your front door really.

Supermarkets: There are two main parent chains, the Aussie owned one and the Kiwi owned one. Their offspring are Countdown, which is owned by Aussies and New World and Pak’n’Save, which are owned by Kiwis.  New World has nicer things, Countdown is cheaper. Pak’n’Save is the big yellow one, which is cheapest. Food is unbelievably expensive in New Zealand; this is because we only have two major Supermarket chains. As a primary food producer, we pay stupid money for the things we grow.

The Warehouse! The Warehouse is both shit and awesome at the same time. A huge red shed full of low priced everything, literally everything. People go on Warehouse dates. You just walk around grazing all the stuff you don’t really need until you find the stuff you almost need. The Warehouse is the go to for anyone for anything.  The Warehouse is not famous for the quality of its wares; they sell some cheap nasty versions of things you’d be better off buying a proper one of. They carry the extraordinarily bad Waikato Chocolate and have a vast selection of DVD’s. The Warehouse is a Kiwi icon and it’s red mate, like a fire engine.

The internet was the best ever invention for New Zealand consumers. Now we can also buy good quality, reasonably stuff without having to leave the country.