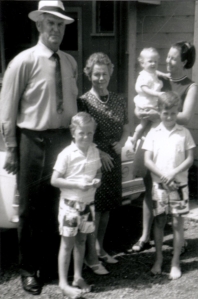 This is the one I started on holiday a couple of weeks ago but typing a blog post on holiday on an iPad is far from easy and I like an easy life. So I did a ‘to be continued’ thing because my thought pattern was still emerging.  It started with me thinking about what life is and what it looks like to we who have seen more than some who have seen less, but expected more.

Once upon a time we wanted for little as we had little idea of what we might have wanted for, other than what little we had.

People know an awful lot more now about what they don’t have and that is not at all a good thing as it detracts from the good things we have that matter more than ‘having stuff’. The things that make us who and what we are, are not our belongings.

Anyway…All that got me thinking to what happened in the olden days. We all have an olden days; we don’t have to be old. We all have our own olden days or our ‘once upon a time’ and some are further from now than others, but there is a constant.

I wrote a piece a while ago I was quite pleased with called ‘Boys will be men’ it’s over there >>> Go and have a look.

I somewhat flippantly dismissed the influence parents can have ultimately upon how kids turn out. While this is true to a degree, as my Aunt was terribly upset that despite all her best efforts her son, my cousin, turned out to be New Zealand’s worst mass murderer and international drugs lord.  Cousin Terry really let the family down a bit frankly. While Parents can do their best in what they teach their kids on purpose. It’s actually a lot of the things they teach them by accident that will define so much of what goes on in a future adults mind. This is why a childhood is called ‘the formative years’.

This dawned on me recently when I was playing some old tunes which were popular about 3o years before I was born. I was discussing why the music was so great and how much it meant to me and realised that what it meant most was the memories it bought back. Of simpler times when I was young and I first heard those tunes on my parents ‘radiogram’. I have a number of albums of artists I would not otherwise have encountered had my parents not been fans. My taste in music is very eclectic now but I love to hark back to the songs I heard first. They make me feel good to listen to because when I first encountered them I was happy. It must be very hard for people who had an unhappy childhood as the soundtrack to it will bring the opposite memories. I am grateful every day that my parents weren’t Country and Western or Genesis fans. I’m convinced that the only reason that Country and Western music exists still is because of generational hand-me-downs. I doubt anyone not exposed to Country and Western music right from the cradle would otherwise choose to listen to it.

This brings me on to the next bit of how our parents form us by accident. Politics and Religion. I doubt many adults talk politics with their children. Let’s be honest. But children grow up hearing the adult deriding the other party or political standpoint; they will form a leaning very hard to shift regardless of the education they will get in later life. The religion is even more intransigent. Kid’s parents if they have a faith will bring up a child in it regardless of the rights or wrongs of it. It’s what they believe so it is so.  Look at the troubles in Northern Ireland. The youngsters have been throwing bricks and bottles from an age when they could not possibly have formed any sort of opinion of their own of the recipient of the missile. The whole of the Middle East is in turmoil because most people take a violently intolerant religious standpoint that they were born with.

On a more personal level, my Dad should have been a Labour supporting type given our incredibly ‘working class’ background. We don’t really have the distinct class divisions in New Zealand as in the UK, but dad was a manual worker. All my ancestors have been manual workers on both sides. In young New Zealand you had little chance to be much else as there was a modern country to be carved from the bush.

My ancestors were pioneers and I’m very proud of that, but our family voted for the Kiwi version of the British conservative party. We call them the National Party. Dad was not a fan of the trade’s union movement; he was very much about being measured for your own worth rather than what ‘workers rights’ some layabout might demand for you. When I say not a fan, I’m being polite. I grew up with a similar point of view so I would never join a union as I want to be measured on my own ability. (A union is a very different thing from a trades association.) Rightly or wrongly it’s an attitude I have inherited and I will not be changing it. Likewise someone who grew up with a father who was a union type will be indoctrinated with all the socialist stuff being discussed over the supper table. They will spend their life voting Labour and hating the ‘tory scum’ despite having no idea what they actually stand for.

I can’t even begin to understand what sort of person votes Liberal. I guess kids whose parents had beards and home knitted jumpers, mums who wore no bras, tie-dyed clothing and liked macramé. The anti-establishment types who would really rather live on a commune but have bills to pay. I don’t understand them but luckily I have never had to mix with them either to my knowledge. It doesn’t take away the fact though that if they have kids they will grow up as Liberals, get bullied at school and not get any dates. They are forced to spend time together and eventually go into politics as they wouldn’t get a proper job because they don’t like authority. This can be the only reason there is still a Liberal Party movement. If you think I’m being harsh, just know that any Liberal politician, if they are true Liberals, believes any terrorist, rapist, murderer or worse has the same rights as you or me, look it up.

So back to my point. It would appear the most forming of our formative years is done by accident by our parents just getting on with being themselves, while we as kids, watched and listened. Remember that, parents, when next vociferously expressing an opinion on something you don’t actually know anything about. You are forming a mind. So learn things, be demonstrative of course, but from an educated, not an ignorant standpoint. And throw away the Country and Western records, please!