Paid to have an opinion. 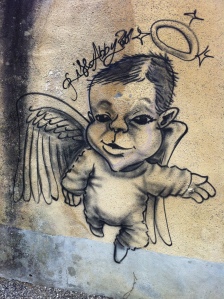 I would really like to be paid to have an opinion. Imagine getting to do that for a living or even for pocket money? We are surrounded, nay, bombarded by a cacophony of visual and audio stimulation. The formal visual representation of this is often known as art, although some people just spray it on walls. Still visual, just much less formal. There are many people who work for various publications who offer their personal opinions on what they see or hear and get paid for it. They are known as critics, or reviewers. There are whole sections of most magazines and newspapers devoted to their musings. They are represented as experts giving us the benefit of their wisdom upon subjects about which they are the most well-informed.

I am going to venture that what we are instead getting, is just the personal opinion of someone who has got about the cushiest job in the world. Art Critics are incredibly impenetrable in their descriptions of a painting.There is much talk of metaphors and interpretation, of palettes and shadows.

There was me thinking it was a painting of a man on a horse, some fruit on a plate, some Dutch people in old fashioned clothing or a fat girl having a lie down.

The fact is that any painting one happens across when visiting a gallery is generally a splendid effort by a talented artist but if you listen to the gallery people droning on about what the artist was trying to convey, only art students can understand or care about what they are saying. Art students are probably art critics in waiting if they can’t actually paint. It’s just occurred to me that a quick straw poll of the artistic credential’s of the art critic might be revealing. Here is an excerpt from the opinion of a reviewer of the Da Vinci exhibition in London

The London picture is sharper, harsher, more remote, with a far bluer palette than the Paris painting (although the latter is admittedly much yellowed by the Louvre’s grimy varnish). The figures in the London version look as though lit by moonlight, which is perhaps what Leonardo intended: the tender group in one picture becomes a nocturnal apparition in the other, a mystical vision or dream vouchsafed from another world.

Clearly that is vital information to have while pondering the London one. Who knew there were two? Will it change the way you look at it? What does vouchsafed mean?

Such is the intensity of Leonardo’s portraits that each one sucks the air out of the space around it. As the youthful musician turns to speak, for example, his alert and intelligent eyes focus on his unseen interlocutor rather than staring vacantly into space, as in most Milanese portraiture of the period.

Sucks the air out of the space around it? High quality art indeed, that’s like science fiction. I would go to see that.

When Italian artists of the quattrocento painted the Virgin Mary, they simply depicted a beautiful woman in a more or less naturalistic setting. Leonardo goes much further, conceiving of her physical beauty as the external expression of her interior, spiritual perfection. He does this by showing her interacting through her serene gaze and beautiful gestures with the two children at her feet. With one arm enfolding St John the Baptist in her cloak, she extends the other, palm open and facing downwards, over the head of the infant Jesus. The Virgin is herself rock-like in her stability. Her extended arms form two sides of a monumental triangle, the lines of which are reinforced by the adoring gaze each figure directs at one of the others.

Sorry, I nodded off and this is just one paragraph from a full-page review.

Someone once said. “I don’t know much about art but I know what I like” or something like that. It is a universal truth. Everyone has vastly differing opinions of what is nice, or horrid, what they like and don’t like. Look at Rubens for example. Many know his work is predominantly of fat girls in various states of undress. I saw an exhibition of his in the Prado in Madrid and what a lot of depressing images. Not because of the fat girls but most of his art is about pain and suffering, death & anguish. People have written entire volumes examining his work. It’s depressing, there, a succinct review in two words. 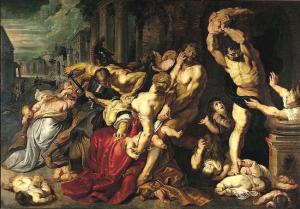 This is called ‘Massacre of the innocents’. Lovely!

Music reviewers are just as bad. They might tell us about what the musician was trying to get across by their lyrics or beat. The description of the anguish or joy they poured in to their frenzied beats or downbeat rhythms. I spent whole lessons at school trying to get under the skin of the lyrics of famous songs and what the song writer actually meant.I was never the wiser but it killed an hour of English once a week.

A reviewer wrote this just the other day about a newly released album.

The 54-year-old from New York has clearly been through a testing time recently: a close friend’s suicide, her son’s revelation that he was transgender; ecological disasters in her home state. She has turned all this turmoil into a set of brutally honest songs about life – “stripping myself bare of all the lies, half-truths, false selves and misguided intentions,” as she put it.

I know that I do not wish to listen to anything this person has performed.

There are people who will write entire books on Country & Western music. I will not read a word of it because it doesn’t matter what they say about the quality of the instrumentals or the singer’s voice or the meaning of the lyrics. Which are usually along the lines of “my baby has left me and I’m really cut up about it”. Or “I like to stomp my feet and holler” or some such thing. I will not read it because I cannot stand Country & Western music.

Funnily enough we can borrow a phrase from earlier in the post and change it slightly “I don’t know much about music but I know what I like”. Again we all have widely differing opinions on what constitutes quality vibes. There are kids who will argue with great passion on the merits of dubstep. To me if it was possible to torture a robot to death, dubstep is what it would sound like. It is beyond noise pollution. But that is just my opinion. I love much from the Punk Rock era, and many find it offensive. One of my favourite phrases is “music is a personal journey”. This can be applied also to comedy. There are actually reviewers of comedy shows. Humour and a sense of it, is incredibly personal and diverse and I can’t see how someone who is not actually me will decide if I will find something funny or not.

Dont even get me started on wine critics. Well you can as I did a whole piece on the rubbish they spout about fermented grape juice.

So in conclusion I am not saying we should not have people paid to have an opinion on the visual, taste and audio stimulation about us. Just don’t try to pretend it is anything other than their own personal point of view and may not always be some worthy and expert examination of something many people may just feel the exact opposite about. Or can I have a job getting paid to express my opinion please? I’m happy to do it for free but I could use the cash to buy some nice art and music.