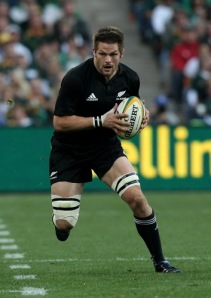 A couple of simple numbers inspired me to write this particular post.  They are the numbers 102 and 116. I’m writing it because it is nice to have a positive tale of this sort and also a large percentage of the people who read my stuff will be either unaware of this guy’s existence or just not know what he has achieved. I just reckon everyone should hear about it because it’s amazing. So apologies, but not many, if you are not a sports fan but this sort of transcends sport. This is about a humble guy who has achieved and continues to achieve incredible things, quietly going about what he does best and making a country proud in the process. His name is Richie McCaw and late last year the Captain of our national rugby team, recorded his 100th win playing for the New Zealand All Blacks. After the 2012 Autumn tour of Great Britain and Ireland, his winning ratio stands at 102 wins after his 116th test match appearance for his country. That’s as near as makes no difference, a 90% win rate in the toughest game in International sport. Think about that for a moment.

Richie McCaw is a worthy national Hero. Not just for his deeds but also his demeanour. New Zealand rugby players and Kiwi’s in general young and old aspire to emulate him and want to meet him just to shake his hand and be near him.  He makes us proud and he is an unassuming Kiwi bloke, just like rest of us, except he is Richie McCaw. Surely the most successful national sports team captain of all time of any code anywhere in the world. I’ve looked it up and I can’t find anyone that comes close. The thing about Richie McCaw though is that he comes across as just a regular bloke who is good at his job, which is what he is. He is articulate, polite, responsible and proud to be the All Blacks Captain. It has never looked like he has carried the job with anything other than great dignity and humility. He meets the people of New Zealand, talks to them and listens to them, he is approachable and deals with people with good humour and respect.

New Zealand has achieved a great many tremendous things as a nation and some of its people have done incredible things on the world stage. Rugby is the national sport of New Zealand and the Captain of the All Blacks is one of the most high profile positions in the country. Few roles in world sport carry the level of expectation of a nation like an All Black Captain does. Richie McCaw has had this responsibility since 2006 and has also won nearly 90% of the games he has played as Captain (69 wins from 79 matches?) Many of those victories were in no small part because of his skills on the field of play as well as his inspirational leadership. His job in the game is quite simple really; to make sure we have more possession of the rugby ball than the other side does so we can score more points than they do. No-one is better at this than Richie McCaw.

In 2011 the Rugby World Cup was staged in New Zealand and when it came to the final we had to play the French, the bogey men had come to spoil our party. I’m confident no sports team has ever walked onto a field under more pressure than the All Blacks did that evening. The All Blacks are just men playing rugby; they are not men of steel immune to pressure. Their great foes, the French, threw the kitchen sink at them that night and the All Blacks held them at bay until the French infringed at the end of the game with time up on the clock. The game was all but over and All Blacks had a point more than the French did. All of New Zealand flew into a wave of relief and ecstasy. All New Zealanders all over the world watching on television erupted into a frenzy. The All Blacks on the field of play were all leaping into the air in celebration, well not all of them, the game was not actually over as the final whistle had not yet been blown, the ball still had to leave the field of play to end the game.

The only person in the country it seemed with the presence of mind to realise this was Richie McCaw. He made his way from the breakdown in play past the jubilant leaping and hugging players to simply tell the replacement half back Andy Ellis, who had the ball, to kick it out of the park to finish the game, only then did then he put his hands in the air in triumph. True leadership in incredible circumstances, keeping his head when all around him was chaos. Just one small example of why he is a Hero to us.

He was offered a Knighthood but he turned it down. He is as I said, a humble bloke.

Richie McCaw is 31 years old and stands just shy of 6ft 2 inches in old money, which isn’t all that big for a loose forward. He mostly plays in a position called ‘Open side Flanker’ and wears the shirt with a number 7 on it.  He is the greatest player in the history of the game of Rugby to pull on the number 7 shirt. This is before we even start talking about his leadership skills.  Sadly because Rugby is not really a major sport on the world stage Richie will never take his place with global sporting icons. Athletes and legends like Pele, George Best, Franz Beckenbauer or even David Beckham. Babe Ruth, Michael Jordan, or Magic Johnson, Muhammed Ali, Joe Frazier or the likes of Ronaldo, the proper one, not the little Portuguese one. Michael Schumacher and Ayrton Senna, Roger Federer or Bjorn Borg. The thing is though that Richie McCaw deserves to be remembered and regarded as highly, if not more so, as any of these men as he has achieved as much as any and more than many of them did. Richie McCaw will always be remembered to we Kiwi’s though as our greatest ever rugby player and the most successful Captain of the All Blacks. The most successful sports team in the world.

His feats will pass into legend when he hangs up his boots and a young fellow being dubbed as ‘the new Richie McCaw’ will take up his mantle. Imagine that mantle for a moment, imagine being told those are the boots you have to fill when you are just 20 years old. That youngster is called Sam Cane, he is the bloke being given that responsibility and you know what? He is not Richie McCaw but boy can he play, you should see him. Who knows what the future holds.

In the meantime Richie is still playing; take some time to watch what he does. If you don’t follow or watch Rugby that’s fine but at least you now know the name of Richie McCaw. A Hero. 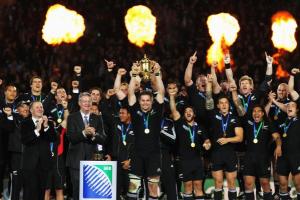