This follows on from my previous post about Britain being Great. I was going to add some elements of what follows to that, but soon decided it needs a post of its own. The British Car industry. Firstly that’s the wrong title for the British car industry as they don’t make British cars in Scotland or Wales to the best of my knowledge. So I’m going to call it the English Car industry. English cars are the best in the world. There, simple. You are now thinking “but Sandy you are clearly mad on two counts. There is no longer a car industry in the UK as it has all been sold or gone bust and secondly, English cars are not as good as their continental or Japanese rivals.”

I say to you, rubbish. English cars are best and I’m going to tell you why.

It is worth remembering that the fact all the commonly known British (English) car names went bust was because the cars were rubbish. The names like Austin, Morris, Wolseley, Triumph, Reliant, Hillman, and Rover. All terrible cars designed for the more utilitarian olden days when no-one had any money. They could never have evolved into the modern era for the other reason that the British (English) car names went bust. This was because the communists who ran the Trade Unions in the 70’s had got everyone standing around outside the car plants smoking cigarettes and standing at Braziers rather than inside the plants making cars. It is pretty much impossible to make a car when you spend your day on a picket line. The people who pay for the manufacture of motor vehicles for the general public find this reluctance to do any work tiresome and ultimately pointless. The communists standing around shouting about the ‘rights of the workers’ without a trace of irony destroyed the car industry and the English had to buy other cars made properly overseas.

A handful of the truly great names soldiered on though. Rolls Royce, Bentley, Land Rover, Jaguar, and Aston Martin to name the best of them. These are the best cars in the world in each of their respective skill sets. These have all been sold to foreign buyers but that does not mean they are not British (English) cars. Who owns the factory does not matter. When you see a Land Rover do you think “Oh well now it is owned by some gentleman from the Sub-Continent it is not really a proper Land Rover anymore?”  Or that Aston Martin being owned by a chap who likes to walk about in what appears to be his pyjamas during the day makes the Aston less impressive? Of course not. That the cars are assembled inside British factories using British skill, science and labour makes them British (English) Cars. You may look at those names and still persevere “but Sandy, loads of cars are better than those”. I repeat, “Rubbish.” So to the nub of the tale, why are they the best?

Firstly it is a little known fact that Britain has the world’s biggest independent car making industry. Loads of clever people making great cars in small numbers in little factories all across the land.  Several Formula 1 teams are also based in England. But I’m here to talk about the big names. Let’s have a closer look at them and why they are the best.

Put it this way. When it comes to supercars, you have a selection of very fast continental cars to choose from. Small boys like the Lamborghini because its low and loud and fast and makes a good poster for someone young who has yet to evolve any taste. For a grown up though? The Lambo is the motoring equivalent of a ‘Prince Albert’. It is vulgar and brash. Fast yes, but Kate Middleton would not want to ride in one. Nicky Munaj might though, as might Cheryl Tweedy. The Ferrari is a splendid fast car but only looks right in bright red. You maybe would like to go for a drive in one once in a while but it will frighten you so you won’t want to find out how fast in can really go. If you do, chances are you will crash it into a tree. I’m not going to discuss the Porsche as it really is just for people visiting from the 1980’s. I’m sure it’s good and fast but to me it sounds like a Volkswagen beetle with a bigger engine and it reminds me of the 1980’s.

The Aston Martin though, say the name again. Aston Martin. It is as fast as any sane person is likely to want to find out a car can go. It looks like it means business from every angle without showing off too much. Also Kate Middleton would be far happier if you offered her a ride in one. Plus you can park it in a field at the Polo without bottoming out on some gravel on the way in. It’s a beautiful but meaningful car that looks like it has been made with some comfort in mind rather than being all about the ‘over the top’ style of its competitors. You feel like you might like to take a long journey to somewhere fabulous rather than flinging it round a race track of a weekend. James Bond dives one. The Aston Martin is the world’s best Super car. Look at the new one, just look at it!

We come to the Jaguar. I have no idea why people when contemplating a large saloon car might go for the Audi, BMW or Mercedes rather than the Jaguar XF. The German cars are all about efficiency and dynamics. Technology and science. The German cars are something you drive to and from work. Or something you drive for work. They are about getting things done in the most efficient and competent manner. Driving the Jaguar though is like driving a seat in a Gentleman’s club to your country estate, for the weekend. It has all the science to make it do the clever things modern cars need to do but it feels and looks warm, luxurious and comfortable. Instead of cold, competent and boringly good at its job. The Jaguar XF is the world’s best saloon car. The Jaguar XK is the prettiest, most capable grand tourer or sports coupe available, in real world money. If not a new one certainly a 2nd hand one in a few years’ time. I’ll have mine in the best colour for a car please, British Racing Green. Moving on.

The Land Rover is the worlds best 4×4 or off road vehicle. You might like to venture that there are other excellent 4×4’s available. There are a handful yes, but none are as good as the Land Rover or more specifically the Range Rover. You may suggest that the Toyota Land Cruiser is the best 4×4 and in response I will put to you the following. 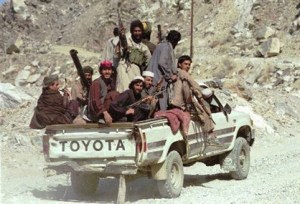 This is about a real 4×4 being used off road. So let’s find ourselves properly off road. Like in a third world hell-hole where there are no roads. You will find a great many Toyota variants, mostly covered in bandits and rebels. When the bad guys come and kidnap you to make millions from your family before cutting your head off on the internet, they will arrive by Toyota Hilux or Land Cruiser. When you have been rotting in a fetid prison for a year with no-one paying your ransom the British Government may finally decide to have a crack at getting you out as an election is looming. The Special Air Service will be sent to rescue you. They will not arrive in a Japanese pickup. They will arrive in a Range Rover. They will whisk you to the only civilised place on the entire continent which is the British Embassy. You will be served some pimms and a ticket home will be hastily arranged. From your embassy window you will see the local tyrants palace where a fleet of German limousines will be parked outside. You will be driven to the airport in the ambassadors Jaguar or Bentley to catch a flight home on an aeroplane most likely powered by Rolls Royce engines.

So as I was saying, English cars are the best in the world. One in British Racing Green please