Signs of the times

This is just a nonsense post to keep the pages ticking over or people will think I have run out of ideas. Well I have but lets keep up the illusion I have something worth saying on a reasonably frequent basis. If you knew me in person you would know that the gaps in my chatter are less noticeable than my consistent expression of points of view. I am still coming to terms with the fact that I am the person most interested in my opinions.

However I do move about a lot and since I have got one of those smart phones with the ability to tweet, Facebook, email and satnav as well as making phone calls. I have come over all observant. I have always had an eye for the ridiculous but now I can record it as I go. I will apologise in advance for the poor photo quality as my phone camera is to put it mildly, crap.

The following is just a wee selection of signage and the like I have happened by, this year alone, when I happened to have some image recording ability to hand.

First up, who knew shopping for a loaf of bread could be so user specific? Clearly here we have the bread for the lady who breathes with her mouth open and is of a frame of mind and state of dress that some folk might think she is less than ideal companion material. 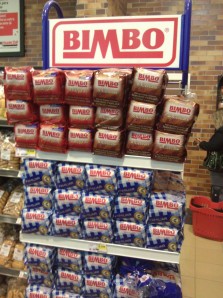 Secondly a couple of aisles later in the same Portuguese superette, I spied the sort of loo roll label that makes you wonder if the Portuguese do things with toilet paper that they aren’t telling us about?

While we were on this little break in the Western Algarve, we had a supper at a very rustic but well-loved restaurant in the town of Lagos where we were staying. It was called Mullens and the menu was easily the best menu I have ever encountered at any dining establishment, anywhere in the world. But the excellence was not in the food but the descriptions of it. Beef Mozambique was far more tasty than it sounds. Be warned though, the toilet is a toilet.

Not long after we returned from our long weekend I had to drive to a business meeting in Cardiff. There is a suburb or area of Cardiff called Splott, Splott has some ‘sleeping policemen’ road calming measures or as we call them in New Zealand, judder bars. It seems in Splott they are called ‘Road humps’ and all good things must come to an end.

As we like to do each year we decided to have a clean out of the cupboards. We found some shoes that no longer fit, are out of fashion or just in a state. We being good citizens will try to recycle things when we can so I took the shoes down to the local recycling bin. I was confronted with this warning and couldn’t help thinking, “Isn’t that one for natural selection?” If someone needs a warning of that, is it really someone we need in the gene pool? I say let nature take its course frankly.

While on holiday this year we, as always, spent much time wandering up and down the wonderful cobbled lanes and alleys of the French towns and villages. The French are very concerned about looking fabulous all the time, well some are, and every town has a number of hairdressers. When I get my hair cut, Jenny uses a pair of clippers set to number 3. But I appreciate some chaps like a nicely fashioned Barnett and no more so than in France. However I cant help but think that the translation let them down a little here and masculine (in French) may not be the best word to accompany this picture from a French hairdressers window. 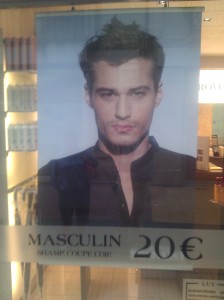 We had some fabulous drives to admire the local villages and one or two of the places we stumbled upon were clearly on the tourist trail for visitors from further afield. Like Danes for example. I know it is childish but I believe a great many Danes speak English so do they not feel the slightest bit silly moving about, in bulk, in this coach? 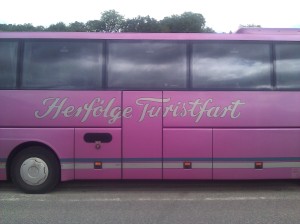 I was in a town in Kent recently and had to do a u-turn. I also did a double take. People live in this street.

Another business trip found me at the foot of a tall office building. Much is made in the UK of the importance of local policing and I was pleased to see a local police station right beside the high street in this busy part of South London. It was  fairly rough-looking area to be frank so I am sure the local people take much comfort from the efforts of the constabulary in the vicinity.

Nearly there, I was telling someone about the 3 Tenors, you know, Carreras, Domingo & the other one, Pavlova or something like that. I got fed up with trying to think of the name of the song I was describing so I thought I would grab the CD and look it up and something struck me as odd about the cover. Can you guess what?

I love old-fashioned advertising. A friend of ours was an ad man before he retired and he has a few quality examples stashed about the place. This is a cracker. Best ever, non pc advertisement of all time, surely?

As I like to keep my posts under 1000 words or you will lose the will to live, this is nearly the end. I had a few beers after our last meeting of the year in London before Christmas and caught the tube back to London Waterloo station for the night journey home. While waiting for my tube train to arrive though my gaze was drawn to this. Which in my view is, by some margin, the most useless piece of public service warning health & safety bollocks ever paid for by a government department. Please help to figure out who this sign is helpful to. Please draw my attention to anyone who would look at this and think, yes, of course. I must be more careful. 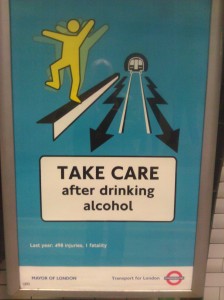 Finally, As it is my blog I can do what I like. This is not a sign, it’s a poster. But in my humble opinion, the coolest poster of the coolest guy, being cool, ever. R.I.P Steve McQueen.