A few years ago I had to go to Rome for a special occasion, the wedding of a great friend of mine to her soon to be husband. When I say had to go, I was invited and chose to go as I wouldn’t have missed their wedding for the world. Carol and Pete were getting hitched in Rome because they were both big fans of all things Italian for some reason. I’m sure there is a word for the Italian version of a Francophile but I can’t think of it for the life of me. Italyfan? (pronounced Eyetaleefan) I just made that up. I’m going to use it from now on because it’s excellent. Yay for me.

Back to Rome. I’d never been so was looking forward to the trip very much. I flew to Rome as one does except I believe flight was to central Italy somewhere and the aeroplane then taxied the rest of the way, that’s how it seemed at least. It was the longest journey from runway to terminal I have ever had anywhere and I’ve been to LA!

I was then whisked in true Italian taxi style into the city. Italian style taxi riding involves much horn tooting, high-speed driving, wild gesticulation and swerving in and out of traffic. If you are faint hearted take a bus, the ride is similar but at least you are with other people and when you die in spectacular fashion you will get on the television.

The thing with Rome is all the Roman stuff of course. The amazing history of the fantastic Roman Empire. You have heard of things like the Colosseum, The Forum, The Pantheon, the Trevi Fountain, Spanish Steps, The Vatican! A veritable feast of incredible history to have a poke about in. You don’t really notice it at first as you are busy thinking of all the things you wish you had done with your life and the outside is just a blur. When the Taxi is forced to slow down due to inner city traffic as you approach your hotel you will initially think central Rome is more compact and smaller than you imagined, very fetching to look at of course but where is everything?

I checked in to my hotel and went off to meet the others in town for the wedding. I found them in a small fabulous square with restaurants dotted around the edges. It was warm and lively with a rather impressive looking building at one end of the Square. Oh! That’s the Pantheon!  Brilliant! A 2000 year old temple as a backdrop to your beer and chat. I wandered over to have a look inside and was surprised they never got around to finishing the roof, it has a bloody great hole in it. It’s in good nick though I guess Marcus Agrippa knew how to stick a temple together. See what I did there?

The hotel was very near the Spanish Steps which are somewhere people travel from all over the world to sit down at. That’s what you do with them, sit on them, you couldn’t hope to go up and down them as too many people are lounging about having their life moment. Texting mum back at home about sitting down, just like they do at Sacre Coeur in Paris. 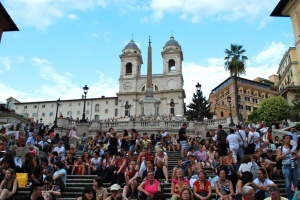 There was a wedding to attend which was absolutely brilliant with the reception in some great big mansion up on one of the hills that surround Rome. One of seven I believe. With that out of the way I spent the next couple of days having a look at the best Rome has to offer.

I went in search of the Trevi fountain which was also not far from my hotel. The Romans don’t like to mess up the cityscape with unnecessary clutter though and they certainly haven’t wasted any money on signage pointing you at Tourist attractions by and large. You have to seek them out.

The Trevi fountain is a truly magnificent thing and surely the worlds best water feature. It also has a splendid building perched behind it. You can throw money into the fountain because a legend says you should. The money is fished out to help the city’s poor apparently, so that’s nice.

The guide books will tell you a visit to the Via Del Corso is a must. This is effectively the main street of the historic centre. Go for a promenade the guide books will say. Yeah, don’t, you’ll get run over. The Street is slightly wider than two cars, just slightly, the footpath on each side is slightly narrower than two people walking abreast. Spending any time on this street is a recipe for small disasters. What I liked about it though was that it runs direct from the somewhat underwhelming Piazza del Popolo to the Incredible Monumento Nazionale a Vittorio Emanuele II.  This extraordinary building is where Mussolini did his best shouting and fist waving

It’s a brilliant dictators backdrop. Perfect for the job of headquarters of subjugation. Behind it is the Forum.

The Roman Forum is where all the proper historical stuff is. This is the main bit of ancient Rome, the centre of the Roman Empire. It is all broken. Basically the forum is a large collection of history in bits. There are all the important sites of Roman life. There is probably even the step that Brutus stabbed Caesar on in there somewhere. Just no signs telling you what anything is. So do yourself a favour and get a guide-book. There will be a spare one in a shop somewhere that I didn’t buy. There are no shops selling guide books anywhere near the Forum though so take one with you.

Just along the way a bit from here is the Colosseum. The greatest amphitheatre in the world some might argue, Certainly all roads in Rome seem to lead to it. This is the thing all the worlds tourists have come to see. They want to see where Maximus did his stuff. There was a queue which seemed to snake off into oblivion, the back of which I believe was at the end of time. I walked to the front of the queue to see what the form was and discovered this was the line to have your bag examined by two elderly ladies. The proper queue for entry started beyond them. I decided that a quick walk around the outside of the Colosseum would be sufficient as I did not wish to feature in history myself

Despite not being Catholic, I wanted to have a look at the Vatican. It’s worth a look, as you can see at a glance how to solve the world financial crisis and pay off third world debt. Before you get too close to the big Church bit, you can see a vast square where Catholics like to gather to hear stories told to them by the bloke in white. There are some great joined up column sort of things encircling that square with hundreds of very large statues on top. Take every second one and sell them to the worlds oligarchs and that’s world debt paid. No-one would notice they were gone as there are so many. Moving inside the Basilica, using a door through which you could push a wingless jumbo jet and you are among the greatest horde of treasure in all the world. Take 15% of it, no wait, 10%, that has some religious significance, melt it down or sell it to art galleries and governments or some more oligarchs and tycoons all around the world and that’s the economic crisis sorted as well. Just like that. I don’t think that the nice folk of the Vatican have seen the sense in this yet. They still like to walk among and hold the golden things while imploring you to pray for the worlds starving children. Moving on.

All good things must come to an end and so must this blog. In summary, stay centrally in the old bit, near the Spanish Steps. The best things to see are mostly walking distance from each other. Unlike me, buy a guide-book, keep your stuff zipped shut as pick pockets abound. It’s also hot in the summer. There are amazing incredible things to see at every turn. Go to Rome but don’t do the whole ‘when in Rome’ thing. Romans talk with their hands and only Italians look right waving their hands about in the air every time they open their mouth, you’ll just look silly and most likely strike a passer-by. Enjoy yourself

Finally though, R.I.P my beautiful friend Carol who very sadly passed away just 2 years after her wedding. I have no words to talk about that. She was amazing.